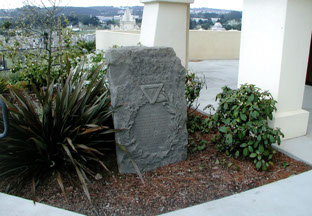 Discovered on August 19 ,2001 by Frank Maffei, long time Colma resident and Colma Historical Association board member, as he was walking along the old Southern Pacific right away as it was being excavated for the BART tunnel to San Francisco Airport.  The headstone half buried at the location near Holy Cross Cemetery and the Donohoe and Carroll Monument Company.  Weighing almost 1,000 pounds, it is now permanently located on the grounds of the Colma Historical Park, adjacent to the Colma Historical Museum Building.

Past arch and chartered

erected as a token of 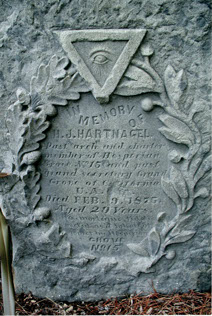 Researching the various names on the monument, Richard Rocchetta, Boardmember and Secretary of the Colma Historical Association discovered that the headstone originally came from the Independent Order of Odd Fellow's Cemetery in San Francisco . The body of H.J. Hartnagel is listed in the handwritten book of burials for the mass grave located in what is now called Greenlawn Cemetery , where most of the bodies from the Odd Fellow's Cemetery are interred. There are no individual burial stones at the mass grave site. It is a mystery as to why this stone ended up in Colma, “separated” from the body. Could it have come on a flat car and been abandonded? The answer may never be known.

Here is what we know about Mr. Hartnagle.

Herman Joseph Hartnagel, born in Damstadt , Germany and a naturalized United States citizen, was an officer of the United Ancient Order of Druids (UAOD), Hesperian Grove No. 15 of San Francisco . Records show he registered to vote at age 21 in 1867 and was never married. He died in Belmont , California of consumption (tuberculosis) on February 9, 1875. Originally interred in Odd Fellows Cemetery in San Francisco , he now lies in the Odd Fellows section of Greenlawn Memorial Park (where 26,000 bodies unclaimed by families from San Francisco 's Odd Fellows Cemetery are buried in a mass grave). According to records at Greenlawn, Hartnagel's physician was Dr. Robert Mackintosh and the undertaker was Massey and Yung.

The funeral will be held at Druids' Hall, 413 Sutter Street, on Sunday, February 14, at 1 P.M., under the auspices of the Grand Grove of the State of California, U.A.O.D., of which deceased was a valued and efficient officer. Members of subordinate Groves are invited to attend. Special invitation is extended to members of Ophir Lodge No. 171, and Unity Encampment, No. 26, I.O.O.F. (of which deceased was a member), to be present.